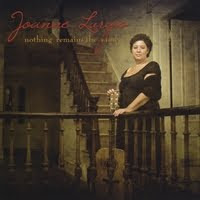 Joanne Lurgio's album "Nothing Remains the Same" was released December 13th 2009. Following on from the succesful 2005 debut album, "Find A Dream -catch it if you dare", it's been awhile between drinks, but indeed, nothing does remain the same, except for the heart warming voice and the presence of a valuable songwriting talent.

"Nothing Remains the Same" is written and performed in it's near entirity by former Mofit Magazines' Singer Songwriter of the Year ( 2007 ) , Joanne Lurgio. An album of 12 diverse, but interlinked songs, it meanders it's way from country rock, to gospel, to tired and lonely ballads, and to simple stories of life itself. What started out as a couple of demo tracks at the infamous Pineyfest Demo Derby, ended up to be a complete round trip musical journey. Joanne takes up the story.....

JL - Through luck and friendship I had a wonderful opportunity to record some of my songs in Nashville, TN. It started out as a demo project, but the more I listened to my recordings, the more I was loving what was happening to my songs and realized I wanted them for myself, not simply demowork. I called my friend Mike Dunbar, who was engineering & producing the demo projects and asked to change direction. to start working on a full length CD. Without hesitation, Mike gathered up some of the best Nashville musicians and we set out to finish the album we'd only just started.


A Rhode Island native, Joanne made the long treck to StringHouse Studios in Nashville to work with long time resident music producer, Mike Dunbar, and as Dunbar puts it, ......

MD - "Joanne was just a pleasure to work with. Although we had some of the best session musicians contributing their talent, it was Joanne herself who provided the backbone of each track, both lyrically and musically, and who required only the lightest of musical intrpretation. Sure, the backing is there, but it is secondary to the strength of vocal lines, and the depth of the songriting as a whole".

Stylistically diverse, yet with a strong sense of continuity, all the tracks on this album take the listener both on a well travelled path, and also down the less travelled side alleys of personal feeling. The deceptively simple blues of "True Love" ( with great alto sax from John Heinrich ), to the elequant delivery and Southern gospel approach of "Walking on Sacred Ground" to the vivid imagery of the title track "Nothing Remains the Same", are all in some ways the same approach, yet with a slight shift in mood, tempo and texture.

With a putity of voice, and an honest no frills approach to production, "Nothing Remains the Same" is not a "perfectly" recorded album. On the converse, being largely recorded "live to tape" with minimal overdubs, and an almost lack of interrupting wizardry, a live studio feel is maintained whilst bringing expression, musicianship and depth of feeling to the forefront. What you see ( or, rather hear ) is what you get.

There are not many vocalists, let alone singer songwriters who can pull off an entire album of listenable and memorable songs.

If you like your music similar to a home cooked 12 course dinner with a warming mulled wine, each track with an everchanging flavour but a strong sense of direction, each with that sense of familiarity yet a subtle but profound difference, then "Nothing Remains the Same" is a must listen. Yes, it has been a long while between drinks, so it's well worth the time to sit back and absorb the atmosphere of a well crafted album. Available from CD Baby, and digitally available eveywhere.